The Nation wants to Know..!! Yup, Its the right time.. the Nation really wants to know what is happening…

Mumbai police last year filed a TRP violation case against Arnab Goswami, founder and editor-in-chief of Republic TV, who used to shout during his debates often. Following this case, the WhatsApp Chats between the Arnab Goswami and BARC’s former CEO Bartholomew Dasgupta where leaked everywhere on the social media.

The release of the conversation between the Arnab and Bartholomew’s WhatsApp chat leaks become controversy of the day. Here we can found the source and data regarding the explanatory video released by Youturn on various topics featured in the WhatsApp leaks. In a statement issued by Republic TV, they said, “There was no doubt in any Indian journalist’s mind that we would hit back, which we did, ” for the Balakot strike issue.

There has also a talk about Hariharan on 2017. He has been working at Republic TV for a few months. Mr. Rangaraj tweeted about his visit in July. On the day of Sasikala’s surrender, TRP evaluators monitored the channels and said, “Sun TV will use this opportunity to grow in other states.” Also, the interview with Gurumurthy and Rajinikanth’s political visit have been discussed.

The company that broadcasts it will get more publicity with that, you can earn more revenue. Can get great advertise for their channel. BARC’s former CEO Bartholomew Dasgupta Arnab has asked to take advantage of the issue of Muslims in West Bengal.

In 2017, News 18 Tamil bribe a minister and placed him in a government’s Arasu cable, according to a conversation by Bartho Dasgupta. The same time in 2019, Manikandan was removed from the post of Information and Technology Minister of Tamil Nadu and Udumalai K. Radha Krishnan was made as a new Minister.

It is noteworthy that after Minister Udumalai K. Radha Krishnan stated the move to take action against private televisions, Manikandan, the department’s former minister, said, ” Everything cannot be changed overnight .” Former CEO of the BARC has advised him to use the Troll army against Economic Times and Times Now.

He also asked if he and Subramanian Swamy were okay, Arnab replied, “We are good off (off record) and you know on the outside (on record).”

When it comes to the TRP-related lawsuit between TV Today and Republic TV, Mann Sangvi, a congressman and lawyer who appears in support of TV Today,  BARK’s former CEO has casually advised him to buy the judge. The next day, Arnab’s case was closed.

Arnab did not pay the amount required to view their channel on DishTV. Arnab also said that Rathore (the minister) had postponed the files that came in connection with it. According to News Laundry, the government lost Rs 52 crore due to non-payment of Republic TV and Zee TV. BARC’s former CEO who was a supporter of Republic TV has said that the BARC should “investigate” when a person from the BARC claims to be “manipulating” several channels, including the polymer channel Republic. All of this is the answer to the question of why the former CEO of BARC did this all too Arnab… BARC’s former CEO has asked the BJP’s Smriti Irani to come to a function to Arnab. He has done that too. In addition, he reads what Arnab had written about how to praise Smriti Rani. He also said that he had agreed to meet him alone. Arnab has said that former Information and Broadcasting Minister Rajyavardhan Singh Rathore is coming to his studio for a secret meeting. Speaking about Prime Minister Modi, he said, “I spoke to the Prime Minister. He just watches our channel, ”Arnab said. At the time, the BARC’s former CEO said it may have been photographed and advertised. The former CEO of BARC has asked for help through the Prime Minister’s Office and through Amit Shah when problems come up. At various times, the former CEO of Park has claimed that the BJP has been assisting the Union Ministry of Information and Broadcasting on various issues. In some places, it is referred to as “NM” and “AS”. When asked by a former Park CEO how he escaped from TRAI, Arnab replied that he was taking the matter of TRAI to AS . Being the person in power over Troy could be Amitsha. Arnab has been a person who has access to a great center of power.

The two have said about the Rs 400 crore and Paul Thackeray’s coalition agreement between the Shiv Sena and the BJP. Arnab is proud to say that he covered the news 20 minutes before the Pulwama attack. He spoke on the pretext that the TRP would rise due to the Pulwama attack and also kept the military secret about the attack to be carried out by India. It has been reported that Arun Jaitley did not come to the ministry due to ill health. But Arnab says in the conversation that he was sent out under pressure. They are also talking about Signal App regarding chat security.

‘One must play dirty’: Chats show how Arnab Goswami plotted with BARC CEO

How we were turned into a nation of elated suckers

Why Tamil Nadu IT minister Manikandan was dropped from Palaniswami cabinet 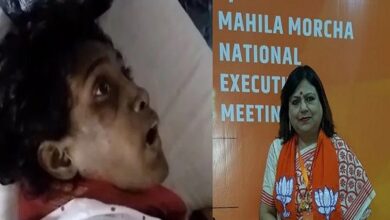 BJP executive tortured her maid in Jharkhand for years! The video is viral!