BJP General Secretary K.T.Raghavan’s video has lead to debates and trolls on social media. In this scenario, it is all over the news that Naam Tamilar Katchi Seeman has expressed his views on the K.T.Raghavan video issue.

“It is shown as K.T.Raghavan has done something wrong that the entire world has not done. Recording his personal issues without his knowledge and releasing it is the social crime, said Seeman”, reports news channels. Trolls and memes are being circulated on social media based on the titles given by the news channels that Seeman is supporting K.T.Raghavan.

What did he speak?

When a reporter asked Seeman on the issue of K.T.Raghavan’s video and Annamalai’s audio, “Leave all those, those are social garbage. It is not worth talking about it. See what is indecency here. It is social crime to place equipment to record the video from his bedroom and bathroom without his consent. He should be arrested first for doing so. It is shown as if nothing like this has happened anywhere in the world. Porn videos were watched by the ministers in the assembly. People who are in positions should not do all this. It is his personal on what he does in his private room. Capturing something from his bedroom and blaming what he has done wrong is not good. It is scary to know where society is heading towards.

What will they gain by overhearing and tracking what one is speaking to the other person? All government assets are being privatised by the government. Nobody is talking about it. He said that 100 lakh crores will be invested in creating job offers. But is privatising the government assets for 6 lakh crores. What is the need to lease assets for 6 lakh crores when you have 100 lakh crores? These are the real issues. Listen to what Supreme Court judge Ramana says. He says where are we leading to when the laws are being formed without any logic and discussion. We should be afraid of this. Trichy Siva, a Member of the assembly says that he has seen 20 years where 36 laws were introduced without any logic as if there is nobody to question it. This is tyranny. Not just dictatorship but tyranny. These things are to be discussed and not about the audio and video released. Who asked you to watch it? Why do you watch it?”, said Seeman.

NTK members share the video of Seeman since the entire content gets invisible when the news channels title his speech in just two lines. 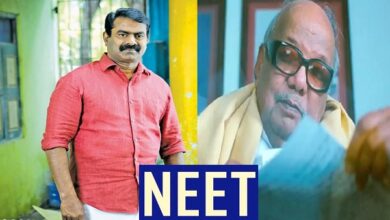 Seeman claims that Karunanidhi wrote a letter welcoming the NEET exam. What is the truth? 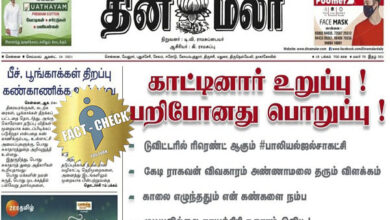 Did Dinamalar title sarcastically on the Bjp K.T.Raghavan video issue ?