Social media users are comparing the prices of pulses in 2014-2021 in an advertisement given on the Coimbatore District Campaign for welcoming Prime Minister Narendra Modi to Coimbatore.

Many people are making fun of this and sharing it on social media. The reason for this is that the price of pulses mentioned as Rs. 200 during the Congress rule.

Comparing the Congress alliance government and the BJP government many posts have been spreading misinformation about the price of pulses for the past few years as a comparison of prices of essential commodities.

Read more: Will lentil prices go down under the Modi regime? | Did you know that lentils have touched Rs 180? In October 2015, the price of pulses rose to Rs 180. Similarly, prices of other pulses also increased. However, they are spreading rumours that the price of pulses has crossed Rs 200 during the Congress regime and that there has been no rise in prices under the BJP regime. The prices of essential commodities depend on the rate of inflation in the respective years. Despite the increase in the price of pulses in 2013-2014, the BJP has not been able to sell at the stated price. They are misrepresenting that the price of the information being spread is higher than it was then.

In our search, we can see that the information given by the BJP in the newspaper advertisement for lentils and sugar prices since the Congress regime in 2014 is incorrect.

Monthly Average Retail Prices of Major Pulses from 2015 to 2016 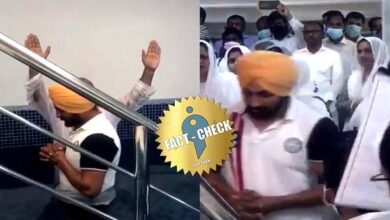 Is it the video of Punjab’s Congress party CM getting baptised ?