A photo of MP Shashi Tharoor conversing with ladies is being shared sarcastically claiming it as a picture from Bharat Jodo Yatra, Kerala.

What is the truth ?

When the photo is searched with Google lens, it is revealed that the photo was posted on Shashi Tharoor’s Twitter page in Aug 2019 mentioning it as photos captured during his annual lecture at ‘Bucerius Summer School on Global Governance’.

My annual lecture at the @BSSZEITStiftung this year was on a pet theme, “multi-alignment in a networked world”. It’s always a pleasure to interact w/some of the brightest young minds from around the world on issues of global governance,as i’ve done since 2001.(pix ©Zeit-Stiftung) pic.twitter.com/NwgAJqpDa9

Images of Rahul Gandhi with his niece, with his female supporters, are also spread with improper captions by BJP Supporters and we have fact-checked it.

Read More: BJP Nirmal Kumar spreads the picture of Rahul with his niece with improper caption and deleted the post later !

They can also be seen sharing fake news related to Bharat Jodo Yatra since it started. We have debunked a few false claims and can be read here, here, here and here.

An old photo of Shashi Tharoor is being shared with a claim that he is busy in Bharat Jodo Yatra, Kerala. 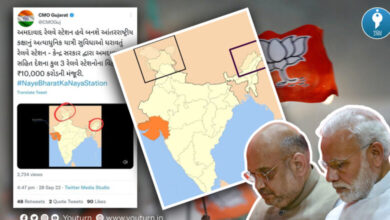 Does Gujarat Government acknowledge China and Pakistan occupied Kashmir are not part of India?