Every year some students who failed in 12th exam and attempted to suicide, so shall we ban the 12 exams? NEET entrance is like that. Look at the opportunity for Tamil students across India to get a medical degree. Annamalai, the BJP vice-president, many of them has been sharing fake tweets in his name and fake posts on Facebook pages run by fan pages claiming to be Annamalai. Many of the comments from that fake ID are shared by thousands.

A fake tweet that in the name of Annamalai posted on Twitter that “students who did not pass Class 12 die without mental strength every year..”. Sharing this statement for the actor Surya against NEET exam has gone viral on social networking sites.

This is the official Twitter page of Tamil Nadu BJP vice president Annamalai. They have created fake pages with the same photo and name. 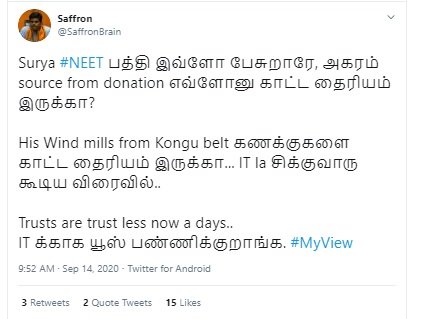 They are also sharing the tweet on the fake Twitter page and the fan page running under the name Annamalai. Some people are commenting on that page thinking it is the real page. We continue to expose fake social media pages and comments in the name of politicians and celebrities on social media. Annamalai In his case, his supporters have shared and retweeted the Annamalai’s fake page post. Do not share without exploring the background of the information circulating on social websites.