If sealing one’s house is the solution for not paying outstanding debts, can we seal Venkatesa Perumal’s temple for the debts brought from Guberan? The video was captured and published to insult Madhuvanthi – TN BJP President Annamalai. Tamil Nadu BJP Executive Committee Member Madhuvanthi’s flat in Asiana apartment, Alwarpet, Chennai was sealed by officials from a Finance company for not repaying the outstanding debts of 1.21 crore rupees. The video of Madhuvanthi pleading with the Finance company officials is viral on social media.

But it is on the news that Madhuvanthi strangely said that her house was not sealed by the officials, it is misinformation and she is not interested to talk about it further.

Meanwhile, a BBC news card claiming that Annamalai commented on Madhuvanthi’s house sealing by Finance company officials comparing it with the Perumal and Guberan story is being circulated on social media.

When searched for the October 14 news cards on the BBC Facebook page as Madhuvanthi’s house was sealed on the mentioned date, a news card about Annamalai commenting, “The faith that the state election commission has shown towards the ruling party has outpowered the TN police department. The temporary success of DMK is the temporary failure of democracy”.

The incident of Madhuvanthi’s house sealing is being trolled on social media. The BBC news card was edited as if Annamalai has spoken on the issue and is being spread. Annamalai has tweeted about the viral fake news card on his Twitter handle. The BBC news card claiming that Annamalai commented on Madhuvanthi’s house sealing by Finance company officials for not paying the outstanding debts comparing it with the Perumal and Guberan story is edited and fake. 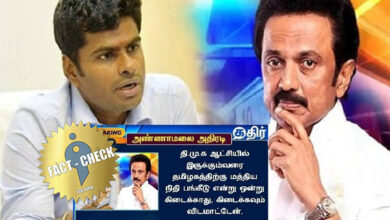