When the oxygen level decreases, there is no need to wait to get oxygen. Mix 20 drops of Aspidosperma Q in one cup of water. Immediately the oxygen level rises and recovers. It is a homoeopathic medicine. Do not waste time searching for oxygen. 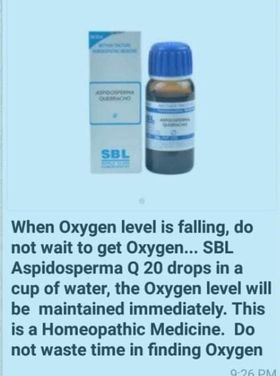 Across the country, the public is experiencing oxygen shortages due to corona. Even in hospitals, there is a lack of oxygen and many people are dying. People are wandering around as oxygen is not available anywhere.

In this case, when a person loses oxygen level, it is being shared on social media with a photo of the medicine that if you take the homoeopathic medicine Ospidosperma Q in water without wasting time searching for the oxygen cylinder, the oxygen level will rise and heal immediately. The readers also asked us to clarify this to the public.

Ansu Nanda, a homoeopathic doctor, reported on India Today about Aspidosperma Q when it was discovered that the drug increases oxygen levels.

“Aspidosperma Q is used in the treatment of cardiac asthma and sometimes in the treatment of pulmonary asthma to relieve asthma symptoms and as a bronchodilator. It removes congestion in the chest and promotes better breathing. This temporarily increases the amount of oxygen taken up by the lungs. But, it is not an alternative to taking the oxygen needed by the patient who is in a critical condition. It should be given only after consulting a homoeopathic doctor and it is not advised to use it on your own, ”said the doctor.

Homoeopathic doctor Vidya contacted them to find out more, “Aspesdosperma Q should be used as a basic supportive medicine for patients with Covid-19 especially when they have a fever or cough with shortness of breath. Aspidosperm improves the capacity of the lungs and temporarily increases the oxygenation of the blood. This is not an alternative to providing the hospital-level oxygen needed by the patient in a critical situation. ”

On the Press Information Bureau’s Twitter page, he said: It cannot be used as an alternative to balance oxygen levels in corona infection. ”

The homoeopathic medicine Aspidosperma Q is not a permanent solution to increase oxygen levels. This drug will increase the amount of oxygen in the body in a short time. But, it will not be consistent. It cannot be used as an alternative to balance oxygen levels in the corona state.

Do not use over-the-counter medications that increase oxygen levels in people with corona. Do not take homoeopathic or other medicines without consulting a doctor.