Chinese banks announced bankruptcy due to the dictatorial tendency of the sanadhana fascist Modi government. It is banned to withdraw more than 1000 Yuan. A post with a screenshot claiming that MP Thol. Thirumavalavan has tweeted condemning Indian Prime Minister Modi and his government for the bankruptcy of Chinese banks, along with a comment to the tweet is being shared across social media.

What is the truth ? Also, be observed that fake news cards as if it is spoken by Thirumavalavan and fake news with his photoshopped face were shared before.

It is evident from our search that the tweet condemning Indian Prime Minister Modi for the bankruptcy of Chinese banks is from the fake account created in the name of MP Thirumavalavan and it must be stressed that the Twitter account is removed later. 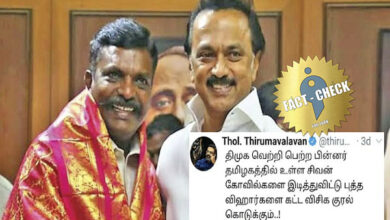