Video spread like a pile of corpses piled up in a Delhi hospital! As the number of victims and casualties of the second corona wave is increasing, there are cases of mass cremation of dead bodies and waiting for a place to burn.

Meanwhile, a 20-second video claiming to have been taken at a Delhi hospital has gone viral on social media, including WhatsApp. Starting in the veranda-like area of ​​the hospital, the pile of dead bodies was left open and the video shows some people in protective clothing.

A reader who sent the video via Youturn Inbox asked about its authenticity (did not post the video because it was a pile of blood-soaked corpses).

Someone was commenting on a video posted on a Vimeo site saying that while separating keyframes from the viralized video and doing a reverse image search, the same video was circulated a few months ago claiming to have stolen body parts from the dead by Corona, but what the truth is and where the video was taken is not known. In February 2021, the fact-finding site maldita.es published an article in Spanish about this video. In it, it is said that the video has been published on the Instagram page of Russia’s digital media Bloknot.

In November 2020, a viral video was released on the Bloknot Instagram page. The video has been circulating in Syria for the past year. In our search, there is some data that the video claimed to be spreading pile taken at the Delhi hospital was taken in Russia and is related to Russia. The origin and cause of this video are unknown. However, it is only possible to know for sure that this video is not from India. 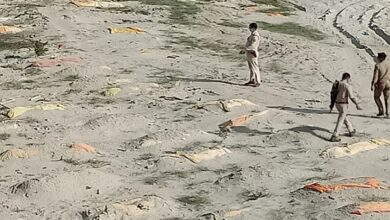 Numerous bodies buried in the sand of the UP Gange’s riverbank!