The situation of Hindu women in Delhi. The love jihad atrocity of the Islamic youth! 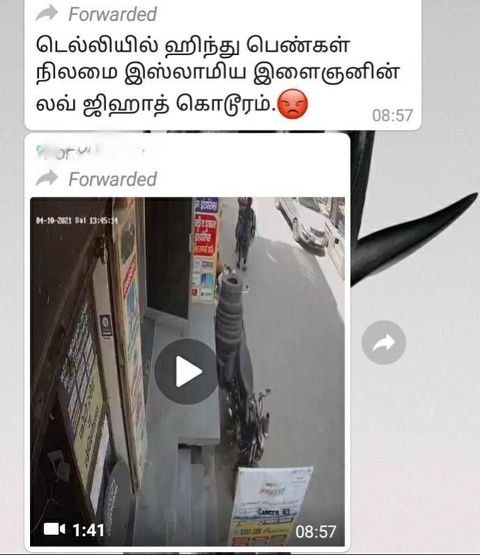 A man talking to a woman on the side of a Delhi road suddenly stabs her with a knife and brutally assaults her. They have been spreading social networking sites, including WhatsApp and Facebook, with a 1.41-minute CCTV video titled “The Situation of Hindu Women in Delhi for the Love Jihad” in which a woman is repeatedly stabbed to death by intimidation so that no one can come near. We did not post the video directly as the video of the woman being murdered was brutal. Many leading news organizations have reported on the incident. According to India Today, police have identified the murdered woman as Neelu Mehta, 26, of Safdarjung Hospital in Delhi. Her husband Harish Mehta works at the Marriage Information Center. Both are from the Rajkot area of ​​Gujarat. The couple, who have been married for the past 8 months, have been living in the Budh Vihar area of ​​Delhi. Harish Mehta stabbed his wife to death on suspicion of cheating on her.

In our search, there was only a husband and wife were in the video of a woman being stabbed to death in Delhi. They are both Hindus. However, it is learned that rumours are spreading about this video that this murder was happened because of Hindu women’s love jihad in Delhi.