RSS has built a 50,000-bed hospital in Gujarat on its own land and dedicated it to the people of that state A photo of the Pentagon building in the United States is being shared as a 50,000-bed hospital built by the RSS in the state of Gujarat and it has gone viral on social media, including Twitter.

But the memes are also being shared by RSS and BJP supporters without knowing it as a satire post. Jeevanand tweeted on his Twitter page using a Pentagon photo for teasing. You can see that is being commented on. In our search, we learn that the images of the Pentagon are deliberately being shared as the image of the 50,000-bed hospital in Gujarat, which is dedicated by RSS to the people of Gujarat by building these on its own land. 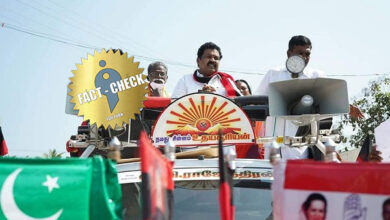 The Muslim League flag in the DMK campaign is rumored to be the Pakistan flag!