The Hindus born to decent parents will not oppose Hindi – H. Raja On the one hand, there are voices in Tamil Nadu against the imposition of the Hindi language, on the other hand, members of the ruling party and its supporters have been commenting on the need for the Hindi language. The discussion between the two sides has been at the forefront of social media. It is well known that H. Raja was known for his controversial speeches. Condemnations would surely have been heaped on such a controversial comment. Debates in the media are also rampant. However, there is no news that H. Raja has made such a comment about Hindus recently. There is no post on H. Raja’s official social media pages.

The viral information started from the News card of the Facebook page Oreadesam. Examining that Facebook page, we were able to find out that the page is also a BJP support page. The pro-BJP Facebook page is unlikely to publish a post condemning H Raja. Also, H. Raja said that there was no viral news card on the page.

It seemed as if the published post might have been deleted. Comparing another News card similar to the viral news card on that Facebook page, it appears that the viral one is edited one. This is because the writing format of the viral news card is different and without a watermark. Director Karu Palaniappan had condemned H. Raja for sharing a spreading news card on his Twitter page. However, he has currently deleted that tweet later. Similarly, fake news also spread as the youth leader of the Tamil Nadu BJP said, “Let those who do not know Hindi go to Pakistan.” this photoshopped News Card went viral on social media.

In our search, we came to know that false news is circulating on social media that H. Raja has said that the Hindus born to decent parents will never oppose Hindi in India. 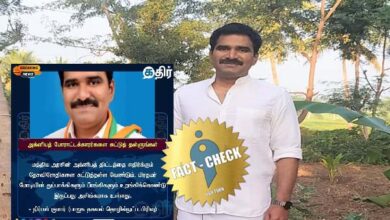