Richer than Adani and Ambani ..! Nizam of Hyderabad, Usman Ali Khan !! Who donated 5000 kg of gold for India! 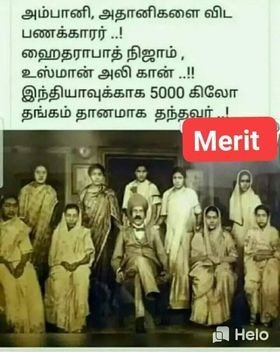 This information has been shared on social media in the form of posts and videos to honour the history of the Hyderabad Nizam for the past few years that the then Nizam of Hyderabad Mir Usman Ali Khan donated 5,000 kg of gold to India’s national security in 1965. The Prime Minister toured the country in 1965 to raise funds to stabilize the post-war economy between India and Pakistan. During his visit to Hyderabad, Nizam Mir Usman Ali Khan donated 5,000 kg of gold to Prime Minister Lal Bahadur Shastri. The Nizam also demanded that the boxes be returned after the gold was delivered, ”the 2014 Deccan Chronicle reported on the Nizam.

The allegation that the Nizam of Hyderabad Mir Usman Ali Khan donated 5,000 kg of gold to the Indian government has been questioned for years. A series of questions have been raised under the Right to Information Act several times in order to obtain evidence for this. 2018 November 11th, ” The truth about the Nizam and his gold ,” the title, published in The Hindu’s article, Kenyans of the RTI question ” of such a donation for any information there ,” the National Security Fund acting Prime Minister’s Office answered to have said.

On the contrary, The Hindu quoted a report in the Hyderabad area on December 11, 1965 as saying that the Nizam had invested 4.26 lakh grams (425 kg) of gold in the National Security Gold Scheme in October 1965 in the context of controlling the economic crisis with 6.5% interest. Addressing a public meeting in the evening, Mr. Shastri congratulated the Nizam for investing 4.5 lakh grams of gold worth about Rs 50 lakh in gold bonds. The investment consisted of old gold seals (coins). Their value was higher than that of antiquity. We do not want to melt these gold seals, but send them abroad to get more value. We may get a crore rupees. ”

According to The Hindu, 1.25 lakh grams of gold was donated by Tirupati Devasthanam and Rs 8 lakh in cash was donated to the government by Telugu film stars.

While Nizam’s gold investment is a great move, the details of who will benefit from the investment are also hidden. The Reserve Bank of India (RBI) has rejected a petition filed under the Right to Information Act (RTI) on Nizam’s investment and end user.

In this regard, one of the grandsons of Nizam Usman Ali Khan, Najaf Ali Khan, said, “This is just news to me. I don’t know who will get this. The Nizam created 52 trusts, but I do not know of any trust that receives this money. ”

It should be noted that the Nizam sought to retain Hyderabad as an independent state and took the matter to the UN Security Council with the support of Pakistan. It is noteworthy that the Nizam was later defeated in 1948 by Operation Polo on the orders of Sardar Vallabhbhai Patel.

In our search, the Government of India stated that there was no information that the Nizam of Hyderabad Mir Usman Ali Khan had donated 5,000 kg of gold to India’s national security in 1965.

On the contrary, in 1965, the then Prime Minister Lal Bahadur Shastri told a public meeting that the Nizam of Hyderabad had invested 425 kg of gold in the National Security Gold Scheme at an interest rate of 6.5 per cent.

The truth about the Nizam and his gold

The rich legacy of Nizams