Look at the atrocity that happened to that Tamil girl who is Superintendent of Police in Malaysia. Great protest happened for the black man who killed by the police in the United States. Today, a Tamil woman was brutally beaten to death in Malaysia. (Note: we did not attached the video as it was a sensible and inappropriate content)

A 1-minute video of the brutal murder with tamil speaking audio in the background mentioned as she was a Tamil woman working as a police officer in Malaysia has been circulating in the social media and including WhatsApp.

At the beginning of the video, a woman with her hands and mouth tied is beaten to death with a rock and beaten with a stick. Then a series of photos of a woman in a Malaysian police uniform are shown.

While obtaining the first image in the video and doing a reverse image search, a video of the brutal murder of a teenager was released on the hoodsite website in August 2020, claiming that the murder took place in Brazil. In August 2020, Thalia Torres de Souza, a Brazilian woman, was abducted and brutally murdered by a local kidnapping gang and videotaped it. WhatsApp has been spreading rumours that a Tamil woman on police duty in Malaysia was murdered by misusing Malaysian police photos with a video taken during a murder incident in Brazil.

Selangor police: Woman murdered in viral video is not a cop 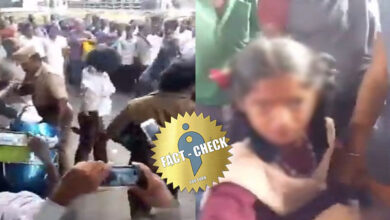 An old false video spreading as that the person who came to abduct children in Salem is trapped!