A video of French President Emmanuel Macron getting slapped is being shared virally in social media and it is being claimed that the French President had been slapped again, similar to the incident that took place in June 2021 which was widely reported back then. A new video is shared in social media again virally with a claim that Emmanuel Macron was slapped again which can be seen here, here, here, here and here.

When we did a keyword search, we found the videos from The Guardian, BBC, CNN, DW News among many other reputed news outlets. Comparing the old video with the now viral video, we were able to ascertain that both videos show the same incident in different angles. Taking a closer look at the hair and T-shirt colour of the person who slapped, we can confirm both are same videos.

Several news outlets in India such as the Hindustan Times, The Tribune, The Print, ANI etc have reported based on the viral video that the French President was slapped again but those have deleted as they realized their mistake. At the time of writing this article, The Print’s article was still live which can be seen here (archived). ANI has deleted their article and also their tweet made on this news item and have given out a retraction statement.

Correction | This story has been retracted, the viral video is an old video which was circulated again. Error regretted. pic.twitter.com/d8Mi4SdeIe

In our search, we find that the viral video claiming that French President Emmanuel Macron was slapped again is the old video from 2021 when he was actually slapped. A video of the same incident had been virally shared with a misleading claim that Macron was slapped ‘again’. 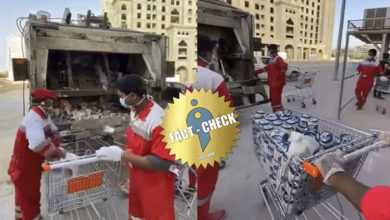 Video of Kuwait dumping all French products is real? 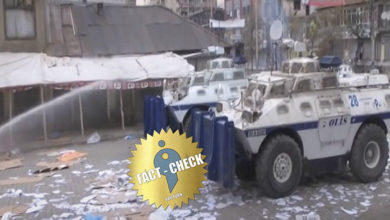 Did the French government hit the Muslims who were praying with water cannons?