Prime Minister Modi’s campaign in Dharapuram. Vote thinking I am the candidate in all 234 constituencies. The lotus will bloom. Prime Minister Modi visited Tamil Nadu yesterday and campaigned in Dharapuram. In such an election campaign, a Puthiythalaimurai news card has gone viral, with Modi saying, “You will support the BJP-AIADMK alliance to make Tamil Nadu a better state like Uttar Pradesh.”

The news card shared on Nazir Ali’s Facebook page has gone viral on social media with over 8,000 shares. But the news card that Modi is spreading that he will change Tamil Nadu like Uttar Pradesh is fake.

They are doing photoshop on the news card of the Puthiythalaimurai channel about Prime Minister Modi’s speech in Dharapur.

Next, they are spreading the news card of the photoshopped News 7 Tamil channel that Prime Minister Modi has told them to think of themselves as a candidate and vote in all 234 constituencies.

They are spreading Photoshop on the News Card published in News 7 Tamil news about Prime Minister Modi’s speech against DMK in the Dharapura campaign.

Read more:  Did H. Raja ask for reservation for the people of the North in Tamil Nadu services?

We continue to post that in the run up to the Tamil Nadu elections, the news cards of the media are being photoshopped and the false news is going viral.

Read more: Did Stalin announce the launch of the Anitha NEET Training Centers?

In our search, we came to know that they are creating news cards made in Photoshop and spreading political parody and misrepresentation that Prime Minister Modi has spoken. 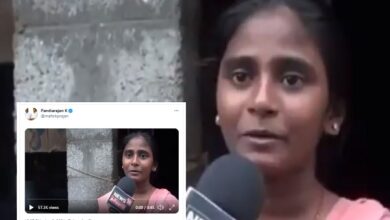 Minister Pandiyarajan released the edited video of late student Anitha for the campaign!