Pictures of News 18 Tamil channel’s news claiming that ration items will not be provided to people who own a concrete house with more than 3 rooms, annual income above one lakh rupees, more than 5 acres of land, are being circulated on social media.

It is viral that the DMK ruling TN government has announced the eligibility criteria to receive ration items.

The viral pictures of the News 18 channel are not recent ones but of 31st July 2017.

Tamil Nadu government made TN Food Security Rules, 2017 for the implementation of the National Food Security Act. The news in 2017 on who is eligible and not eligible to receive ration items created an outrage among the public.

As this news on 31st July 2017 created an outrage among the public, the next day, the then Food Department Minister Kamaraj in the ADMK regime has given an interview asking the public not to believe rumours.

“We had requested to exempt TN from the National Food Security Act brought by the central government. And we were exempted from the Act as requested. It is a practice to publish in the Gazette the legal provisions relating to the distribution of ration items. Don’t fall prey to the rumours, there is no change in the distribution of ration items, said the Minister”, reported 1st August 2017 dated Dinathanthi article.

The pictures that claim that the DMK government has announced the eligibility criteria to get ration items are not recent ones but were published during the ADMK regime in 2017. However, the then ADMK Minister Kamaraj has denied the news and clarified that there is no change in the distribution of ration items.

Is it the video of the King of Bahrain with his robot bodyguard?

Is she the 210-years-old world’s oldest woman from Pakistan ? 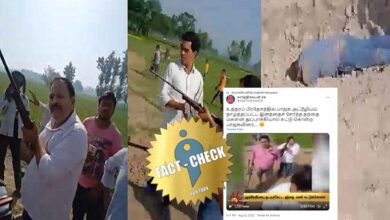 DMK members spread the old news that father and son were shot dead by BJP members in Uttar Pradesh!