As the Tamil Nadu Assembly election field was in full swing, we saw a separate field, a photo of Seeman, the co-ordinator of the Naam Tamil Party spreading virally on social media saying that Seeman had a secret meeting with BJP leaders.

Youturn readers are constantly being asked about the reality of the news about the photo of Seeman with BJP leader Vanathi Srinivasan and Arjun Sampath. In search of the title, the Dhinakaran daily published such news on March 13. The same news is reported on Dhinakaran’s website. Unaware of the authenticity of the photo, they have released the news stating that NTK party did not take the call to verify the news.

The photo of Seeman, Vanathi Srinivasan and Arjun Sampath sitting together is not a recent secret meeting where the photo has been posted on social media since 2017. On August 17, 2017, the special debate: “Is it possible or impossible for the film industry to succeed in today’s Tamil Nadu politics?  The photo was taken during a special panel discussion on News 7 Tamil news channel.

Seeman, Vanathi Srinivasan, Arjun Sampath, Nanjil Sampath and Myilsami have addressed the special menu. In the viral photo, Sampath can be seen sitting near Seeman.

Since it is election time, fake news and rumours are spreading on social media. It is clear that the old photo is being misrepresented in the current election context.

In our search, the photo that was spread and claimed to be that a secret meeting involving Seeman, the co-ordinator of the NTK Party, with the BJP leaders was taken during a special menu event held in 2017.

It is learned that Dhinakaran News Agency has also published false news without knowing the authenticity of the photo claiming that it is going viral on social websites. 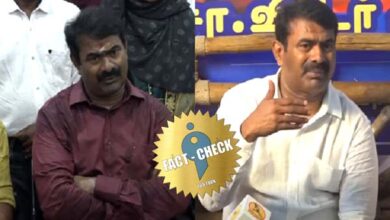