Is it a golden toilet in S.P.Velumani’s house? Few pictures claiming that a golden toilet is seen during the raid at S.P.Velumani’s house is doing rounds on social media.

When the viral image is reverse searched, we found the same picture on ‘Newyorker’ website dated September 2016. The golden toilet is created for the Guggenheim Museum restroom. We have fact-checked and published an article about the claim that DVAC has seized money and jewels during the raids at the premises of S.P.Velumani.

Similarly, the pictures claiming to be the golden toilet at S.P.Velumani’s house is also being circulated.

Apparently, the claim that it is the picture of the golden toilet in S.P.Velumani’s house is a rumour. The picture was captured in America. 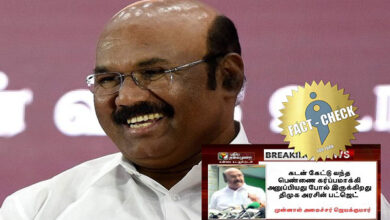