So a “fast” Vande Bharat Express saves only three minutes for the journey between Bombay and Surat? Vande Bharat trains are designed and manufactured by Integral Coach Factory (ICF) in its Perambur facility in Chennai under the Union Government’s ‘Make in India’ initiative. It is estimated to be significantly cheaper than similar trains imported from foreign countries. It was initially called ‘Train 18’ during the manufacturing phase since it took 18 months to complete. When the first commercial services with ‘Train 18’ were launched in 2019, it was renamed as “Vande Bharat Express”. There are 3 services of these trains which are New Delhi-Varanasi, New Delhi-Katra, and Mumbai-Gandhinagar. The Mumbai-Gandhinagar (20901) train has 3 stops on the way to Gandhinagar. The train stops at Surat, Vadodara and Ahmedabad before reaching Gandhinagar. Now, several social media users are sharing a picture that says the time taken from Mumbai Central to Surat in Vande Bharat Express is just 3 minutes faster than GNC Shatabdi (12009) and Tejas Rajasthani Special Train (12951) which can be seen here, here and here.

A ticket to Ahmedabad from Mumbai Central in the Vande Bharat Express is priced at Rs.1200 for a ticket in AC Chair Car which is lesser than the similar class of trains. The IRCTC Tejas Express charges Rs.1670 and GNC Shatabdi charges Rs.1300 for the AC Chair Car ticket. HAPA Duronto Express which is a different class charges Rs.1300 for an AC 3 Tier ticket. Karnavati Express (12933) and ADI Double Decker (12931) which are a tier below the Vande Bharat train charges Rs.685 for the same travel but takes almost 2 hours more to reach the destination.

Similarly, Vande Bharat Express (22436) running between New Delhi and Varanasi reaches the destination in 8 hours which is at least 2 hours faster than the next fastest train. Another Vande Bharat Express (22439) which runs between New Delhi and Katra in Jammu & Kashmir takes 8 hours for 655 kilometers. The same train journey in the next fastest train takes 10 hours and 35 minutes.

Although Vande Bharat trains which are capable of running at 180 kmph are being run at a meager 130kmph, it is still significantly faster than other trains on both top speed and travel time. 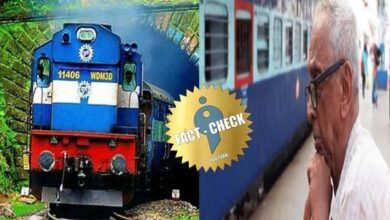 Rumour has it that the train fare concession for senior citizens will come into effect again!