A 16-second video of Uttar Pradesh Chief Minister Yogi Adityanath and the BJP talking and laughing as they sit next to the body wrapped in the Indian national flag is being shared on social media. Followers are being asked to comment on its authenticity. In this regard, the video has been shared on social networking sites since 2019. As it is election time in Tamil Nadu, you can see this video being shared again. News 18 and the Deccan Herald reported on the incident where the BJP, including Yogi Adityanath, smiled during the funeral of a former Uttar Pradesh chief minister in 2018, while searching for a scene where Yogi Adityanath and others were talking and laughing near the body wrapped in the national flag. The video of Uttar Pradesh Chief Minister, Bihar Governor Lalji Dandon and UP Ministers Mohsin Raza and Ashutosh Dandon talking and laughing from behind during the funeral of ND Tiwari, who was the Chief Minister of Uttar Pradesh and Uttarakhand, went viral on October 21, 2018. Has been featured in news including the Deccan Herald. This video of Yogi and ministers is going viral. News tak 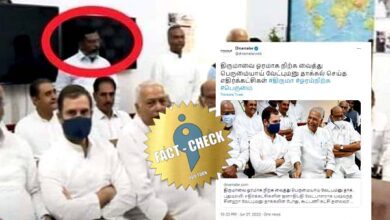