The photo, which features a photo of Periyar in a white T-shirt worn by music composer Yuvan Shankar Raja with the caption “Don’t need caste”, has gone viral on Facebook and Twitter. Opponents of the caste system have been sharing this photo of Yuvan and posting the same caption. Others have been sharing Yuvan’s photo with anti-Periyar text and anti-reservation slogan since Periyar’s photo was featured. Recently, composer Yuvan Shankar Raja posted a photo of himself wearing a T-shirt with the caption “I am a Tamil speaking Indian” and actor Shirish “I don’t know Hindi”. Following this, the phrase “I don’t know Hindi” went viral on social media. At the same time, criticism arose against them and protests erupted on the part of those who supported Hindi.

Following this, a photo of Yuvan wearing a T-shirt emblazoned with the words “Don’t need caste” has been shared. But, it is edited by someone using Photoshop. Yuvan has not posted any such photo. Yuvan posted a photo wearing a plain empty T-shirt on his official Facebook page on September 8, someone photoshopped that photo with the caption “Don’t need caste”.

Similarly, misinformation in the name of the BJP youth leader and H. Raja, who has a pro-Hindi stance, are photoshopped and went viral. 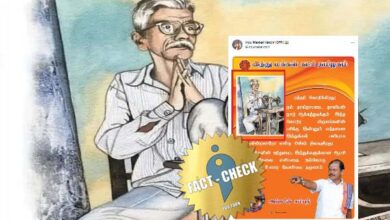